On February 28, 2014, Cheryl suffered from a subarachnoid hemorrhage and was given a 50% chance of surviving the first 24 hours. She beat the odds and stayed alive. On March 2nd the doctors went in and coiled her bleed. The day after, Cheryl woke up and seemed relatively unscathed. Only showing minor weakness on her left side, she was able to talk, knew who everyone was and had her wicked sense of humor.

A week later she fell into a “light coma” and suffered a severe stroke.

When she awoke 8 days later, she was just a shell of her former self. She couldn’t talk, wasn’t able to focus and did not have the use of her left side.

From there she would begin 7 months of intense in-home rehabilitation followed by several month of outpatient rehab.

Today, she still can’t use her left arm, is half blind and is hearing impaired… but she is able to walk, is talking consistently and has regained that wicked sense of humor.

She’s currently lives with her daughter and is co-writing a book about her journey with Manny. 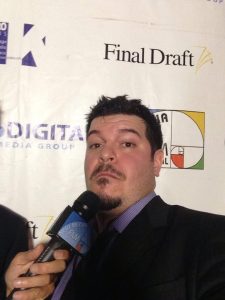 A writer at heart, Manny has been working in Hollywood since 2010 when he moved from his home in Dearborn, Michigan. He met Cheryl soon after and they immediately hit it off. They have worked on several screenplays together and are currently working on a book about everything Cheryl has gone through.

After a successful weekly column about screenwriting, Manny moved into podcasting where Cheryl sat as his co-host. Their show, Breakin’ In! was well received on an international level.

Since Cheryl’s “accident,” Manny has been Cheryl’s caregiver. He’s been with her every day helping her get back the life she had before.